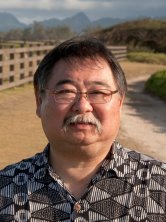 Garret K. Hongo’s poems and essays have appeared in American Poetry Review, Antaeus, Field, Georgia Review, New England Review, Ploughshares, Parnassus, The New York Times, Los Angeles Times, Hawaii Herald, and The New Yorker. He was a finalist for the Pulitzer Prize in 1989, and he has been a recipient of a Guggenheim Foundation Fellowship, National Endowment of the Arts Fellowship, Lamont Poetry Selection of the Academy of American Poets, and Rockefeller Foundation Fellowship among others. Currently, he is a Professor at the University of Oregon in Eugene.

Robin Tung: What sets the University of Oregon’s MFA program apart from other programs?

Garrett K. Hongo: We do very close mentoring of our students here, meeting with them throughout their first year in one-on-one conferences regarding a list of readings arrived at through exploring their interests and choosing texts with them that we think are central to those interests. Essentially, an MFA student meets with each of us at the beginning of each term (Fall, Winter, Spring), declares an interest or topic (landscape poetry, the pastoral, elegy, poetry and cities, ethnic identity, love poetry, etc.), and names a few books they’ve always wanted to read. We try to shape this into a stepped sequence of learning, make a few suggestions of our own, and finalize a short list of books/poems they’ll read that term. They then meet with us for about an hour every other week, speaking to what they’ve read, answering questions we direct to that reading. These are essentially like tutorials in the English college system.

We’re also 100% funded, which is to say, every student admitted gets full aid in the form of a full tuition remission and about $18,000 in stipend every year.

It’s a close-knit program as well, students identifying strongly with their admit class and forming strong personal, intellectual, and creative ties over the two years here. We admit only five in poetry in any given year, so you can see it’s an intimate situation. And, as everyone has primarily the same level of funding, there isn’t a material reason for jealousy or envy to grow. The program has always been strongly amicable and conducive to creativity for that single reason.

Finally, Eugene itself is a great town for graduate students, geared to them economically. Affordable housing, recreation, restaurants and beer halls. And it’s not a big city–one can bike or ride the bus just about anywhere. I myself chose to come here partly because of that, having been a student in an urban(ish) place and taught in two large cities where the students struggled to survive economically and psychologically, being at the bottom of the economic ladder there. Again, in Eugene, the economies are geared to their level.

RT: What are your admissions rates: how many applied last year, and how many were accepted into each genre?

GKH: We accepted 5 out of about 135 applicants this year. But many are admitted from the wait list, which is about 15 deep in any given year. Fiction also accepts only 5 applicants, making an annual MFA class of 10 each year.

RT: What does the committee at UO look for in a candidate?

GKH: Strong academics, a concerted and an informed reason for being interested in Oregon, and an excellent writing sample. Applicants often rush the Statement, toss it off, try to be flip and that never is impressive. We’re interested in their motivations, inspirations, and love of the art and craft of poetry and what they may have learned from their reading and their teachers. A Statement should reflect that.

Recommendations matter, of course, especially from academic advisors who can attest to an applicant’s interest in literature and ability to learn. Letters from writing mentors also matter, though my experience is they consistently exaggerate and often undervalue learning in the tradition. From a standard set of three letters, at least one should be from an academic instructor who’s taught them a course in literature.

RT: Are there stylistic or form leanings (traditional vs experimental, certain writers or texts taught each year)?

GKH: I’d say we lean towards a stronger interest in traditional poetics, an appreciation for the standard canon, and also the recognition of individual talent. Experimental poetry is not our forté. But before naming writers who are taught each year, let me first name the primary graduate teachers of each of our faculty: Charles Wright (mine), Eavan Boland and William Logan (Geri Doran’s), and Wyatt Prunty and Peter Sacks (Daniel Anderson’s).

Next year, I’m teaching a seminar in traditional poetic meter and forms and Daniel Anderson is teaching one on Shakespeare’s tragedies. Geri Doran taught one on Robert Lowell recently and is planning to soon teach another on Elizabeth Bishop. I also teach a seminar on traditional poetic genres and Danny teaches one on poetic closure. Geri’s very special seminar is on “deep syntax,” a course on the complex syntactical dramas enacted in poetic discourse from the 19th century through our time.

RT: What texts and authors did you teach this year?

I also taught from Erich Auerbach’s rhetorical criticism, M.H. Abrams’s historical criticism, the semiotics of Ferdinand Saussure and Roland Barthes, the psychoanalytic texts of Sigmund Freud and Jacques Lacan, philosophic essays by Jacques Derrida and Anthony Appiah, and Immanuel Kant’s Critique of Pure Judgment (“The Analytic of the Sublime”).

RT: What advice do you have for new writers?

GKH: Find a teacher who might recognize the gift and sincerity you possess, who might see the greater talent you may not have recognized that is within yourself. That was my experience with my MFA teachers–Charles Wright, C.K. Williams, and Howard Moss. They asked more of me than I thought I had to give and I learned that there was a voice great within that I had not yet the courage, the vision, or the affirmation to let out. They helped me with that and I am forever in their debt. They held me to my talents and my motivations that I was myself afraid of recognizing and putting first. They said, “Sing the Body Electric!” and plugged me in.

RT: What are you working on now?

GKH: I’m working on a book-length piece of non-fiction in the tradition of the apology or confession. Next, a book-length sequence of poems about three generations of the artistic scene in Japantown, Los Angeles.